“I have discovered that all man’s unhappiness derives from only one source – not being able to sit quietly in a room.”~ Blaise Pascal, Pensées

any of us already felt lonely before the social isolation required by the coronavirus pandemic and many others are now encountering loneliness as we socially remove ourselves. Adjustment to this new experience will be uncomfortable if not painful. In “The Origins of Totalitarianism,” Hannah Arendt described loneliness as “the experience of not belonging to the world at all, which is among the most radical and desperate experiences of man.”

This disconnection – from our friends, colleagues, and from the world at large – is distressing for many. Many of us are seeking connection in whatever ways we can find it, often seeking out others through the multi-tiered windows on our video conferencing computers or shouting out to neighbors across the street.

In our loneliness, we seek to fill the lack of social interaction by turning towards others however we can. That makes sense as we are genetically hard wired for social connection and relationships. We also, though, are endowed as a species with self-aware consciousness. We reach out to others because the alternative – being alone with ourselves – is awkward and uncomfortable.

“The body is a house of many windows: there we all sit, showing ourselves and crying on the passers-by to come and love us.” ~ Robert Louis Stevenson, Virginibus Puerisque

Our current era is marked with an anxiety around introspection. We shrink from the possibility of self-examination despite the exhortation from older philosophers like Socrates who famously declared that the unexamined life is not worth living.

We avoid our selves for a variety of reasons. Our technologies have eradicated boredom. We no longer have the emotional tools to sit alone. Our era is defined by an agitated, anxious psychology that is afraid of itself. We are addicted to a social media environment that deforms our sense of who we are, and which promises easy companionship, but offers little firmly anchored friendship that can weather the storms of life.

German philosopher Martin Heidegger emphasized boredom as a part of the human experience. It is that condition which enables surprise. Heidegger suggested that we avoided reflecting on the fragility of our lives through practices such as Das Gerede, meaning the chatter about trivial matters. That is not to say being attentive to the news at this time is inappropriate, but the modern social information sphere and media consumption has all the hallmarks of the superficial. Chatter is the sum of all those distracting practices that soothe our existential anxieties and comfort us through the familiar and trivial. It is a similar premise that Brené Brown identifies as our self-medicating practices to avoid the discomfort of honestly addressing our vulnerability.

Another fear of being alone with our own thoughts is that those thoughts might not be agreeable. Our minds have an irritating capacity to inject thoughts from our subconscious when we least expect them. As observed in The School of Life’s essay about confinement, “The new ideas we might stumble upon if we did travel more ambitiously around our minds while lying on the sofa could threaten our mental status quo.”

I’m not asking you to turn away from others. I am, however, asking also that you venture towards the discomfort of aloneness and not seek means to avoid it. The reward of doing so is a clearer understanding of who you are, an encouragement to think boldly, the potential to nurture a more resilient, creative self, and even a sense of the transcendent.

I’ll offer an additional way to approach being alone while feeling connected: Writing letters. While we have substituted virtual connection for physical togetherness, that is based in a spatial concept of being apart but still acting in real time. By thinking of our disconnection in temporal terms, we might reframe feeling connected to others, but asynchronously.

Poet Ted Hughes described letter-writing as “excellent training for conversation with the world.” In his book, “To the Letter,” Simon Garfield suggests that as opposed to emails, text, and other forms of immediate communication, a letter’s characteristics include: “the quality would probably be better, the physical effect memorable, the pleasure more… and then there would be the unusual pleasure of receiving a letter back.” 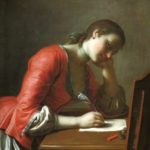 Letters enable us to reclaim what used to be common; that ability to reveal ourselves subtly, cerebrally, and gradually. They are items of instruction and delight. Yes, of course, they are cumbersome to create and distribute, yet it is in our commitment to expressing ourselves in this form that the deeper weight of our thoughtfulness can be felt.

What if we should embrace this moment for its inefficiencies? What if we rediscovered the pleasures of anticipating the future or of recalling the past? What if we turned to the asynchronous instead of the perpetually immediate, the call-and-response pings and vibrations of modern technology? Ironically, we are best able in the current moment to act communally by coming together, alone.

The 25th subscriber to my eNewsletter for fresh thinking on conversation will receive a copy of Dave Isay's Listening is an Act of Love.

Thanks for subscribing! I'll let you know if you were the 25th subscriber and winner of Dave Isay's book...