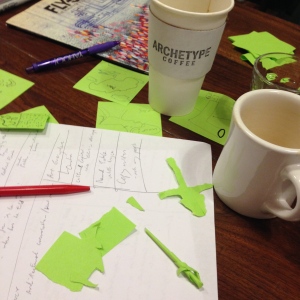 At Monday morning’s Brain Buzz conversational creativity clinic, one of Dan Gilbert and my ideation adventurers spoke of the need to address inequalities in our community. Inequality is one of those issues that has chafed my sense of right and wrong since childhood and this Brain Buzz conversation has stuck with me for the last couple of days. The last decade has revealed increasingly stark disparities of wealth and poverty and dismaying divisions in treatment of and empathy between peoples of different race.

The Brain Buzz conversation referenced initially the need for safe places for members of our community to engage in difficult discussions, though we quickly recognized that a more intractable problem is apathy. Too many people in Omaha are insensitive, stressed, express a dearth of authentic compassion, or lack the capacity to move beyond the narrow confines of job, family and home. Safe places for conversation are important, but they alone are inadequate to breach the perceptual barriers that confront genuine connection between neighbors and neighborhoods. Obama’s Presidential term has surfaced the conflicting views of whites and ethnic minorities. Instead of experiencing a post-racial society, we discovered an awkward conversation about racial disparity. Obama’s term also has revealed glaringly the widening abyss between those few whose wealth is at astonishing levels and the increasingly impoverished remainder, where most Americans are treading the water of stagnant wages or sinking beneath the poverty line.

Obama had this to say in a recent interview:

“I think that the fact that there’s a conversation about it, and that there are tools out there that we know can make a difference in bridging those gaps of understanding and mistrust, should make us optimistic.”

Our Brain Buzz conversation began to address what those tools might look like for Omaha. In some respects, those “tools” are data, but that is insufficient of itself to create change as it merely gives expression to the situation. One of the important words used by Obama is “bridging,” which coincided with our Brain Buzz discussion morphing into consideration of the need for bridging capital in our social spheres.

Social capital is a term that has its intellectual roots going back centuries, including Enlightenment thoughts of David Hume, Edmund Burke and Adam Smith, but does not have a contemporary settled definition. Robert Putnam, in Bowling Alone: The Collapse and Revival of American Community, suggests that, “The term social capital itself turns out to have been independently invented at least six times over the twentieth century,” and credits Lyda J. Hanifan with its first use in 1916. Hanifan wrote of social capital that, “The whole community will benefit by the cooperation of all its parts, while the individual will find in his associations the advantages of the help, the sympathy, and the fellowship of his neighbors.” The exploration of social capital has gained momentum since the concept become the focus of World Bank interest. Researchers for its Social Capital Initiative suggest, “Social capital refers to the internal social and cultural coherence of society, the norms and values that govern interactions among people and the institutions in which they are embedded.”

Putnam colorfully distinguishes between two dimensions of social capital: bonding and bridging, where the former “constitutes a kind of sociological superglue, whereas bridging social capital provides a sociological WD-40.” Bonding social capital has social value in cultivating cooperation, trust and collective strength among individuals and groups with shared history, experience and purpose, especially if they represent minority, historically oppressed or marginalized groups. They can form a cohesive, if homogenized, social cohort with strong ties, but negatively may exclude others or silence diverse views internally, or create cultures of nepotism and corruption. Bridging social capital builds networks between heterogeneous groups, allowing different entities to share and exchange information, ideas and innovation. It creates the possibility for consensus between groups with diverse interests.

That social capital is essential for social cohesion is made clear by the World Bank’s Social Capital Initiative, declaring that, “Social capital is the glue that holds societies together and without which there can be no economic growth or human well-being. Without social capital, society at large will collapse.” That bold assertion is mirrored by Putnam’s alarming finding that “Americans are right that the bonds of our communities have withered, and we are right to fear that this transformation has very real costs.”

Omaha needs a sustained, long term, deliberate and extensive array of welcoming, open and compelling initiatives that encourage and implement engagement among and between different people and diverse neighborhoods. Fortunately, there are people, such as those at our Brain Buzz, who are eager to be catalysts, using conversation as both method and outcome to increase the bridges of social capital. It is what makes me optimistic for conversation and community in the coming New Year.